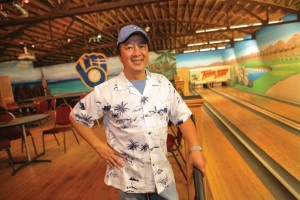 Paul came to Milwaukee at age 5 and forged a deep bond with his grandfather and primary role model Joe Wong, a leader of Milwaukee's then burgeoning Chinese community. He lived with his extended family attending Milwaukee public schools before going to high school at St. John's Northwestern Military Academy. He graduated college from The University of Wisconsin-Madison and began his career in hospitality as a manager at Hilton Hawaiian Village, Waikiki Beach.

In 1974, Paul married Margaret "Peggie" Jones. The couple began their life together in Enderis Park, opposite a baseball diamond, growing close there as softball teammates. Eventually they moved to Wauwatosa where they raised their five children and remained together for 32 years.  Paul was an incredibly involved and affectionate father. He served as a Cub Scout leader, little league coach, and chaperone. Despite his ambitious career, he prioritized his children above all else.

In 1998, Paul divested himself of those ventures and in 2000 opened Long Wong's, the world's first Chinese-American sports bar. His proximity to County Stadium and later Miller Park allowed him to pursue his quixotic love affair with The Milwaukee Brewers.

A respected leader in the business community, Paul was a member of the Wauwatosa Chamber of Commerce, a board member of The Zoological Society of Milwaukee, and president of The Milwaukee Brewers Gold Club.

In 2010, Paul suffered a debilitating stroke that cost him his autonomy and livelihood. Despite this setback, he bravely lived the remainder of his life with dignity.

Paul will be remembered for his gentle demeanor, exceptional kindness, and extraordinary generosity.

To send flowers to the family or plant a tree in memory of Paul Moy Wong, please visit our floral store.